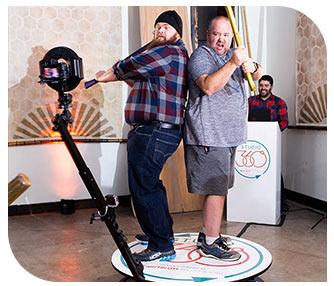 Wedding entertainment is changing all the time, and there is always a new trend around the corner for you to try out and your event.

When it comes to wedding photo booths, one of the newest additions to the market is the 360 photo booth. But, what is a 360 photo booth, and why is it something you may want to add to your wedding entertainment?

Whilst it may be called a photo booth, the idea of a 360 photo booth is that it is a video booth. It contains a camera that can revolve 360 degrees—capturing a slow-motion video. The video captures 120 frames per second of the person standing on a platform.

You may have seen a 360 photo booth on the red carpets with some of the biggest celebrities in the world capturing their very own 360 images and looking incredibly glamorous in the process.

PictureBlast has bases through the UK, with booths situated in Manchester, London and Birmingham. So if you are looking for a photo booth hire Birmingham we have the perfect range of booths for you.

There are many reasons why a 360 photo booth might be the ideal choice for your wedding or special event. The first reason for this is that it is one of the latest forms of entertainment on the market.

It is ideal if you want to offer your guests something that is entirely different from what they may have seen before at other events, which means that you will be remembered for the right reasons.

Another reason to hire a 360 photo booth is that it is a very visual addition to your event. Guests will be interested and want to know what it is and what it can do.

If your guests decide to use the photo booth, they will be able to easily access their videos and send them to themselves. This could be via text or email. Whichever is the right one for them.

Another great thing about these photo booths is that they are suitable for a range of different event types. It doesn’t matter what the type of event is; a 360 photo booth will offer something that the guest is going to remember for some time to come.

Finally, these styles of photo booths don’t take up as much space as you may think, which means that even the smaller wedding venues are going to be able to enjoy having one of these 360 photo booths there.

If you are organising an event, then make sure that your guests have a great way to keep themselves entertained and to have a video that they can treasure for some time to come.